Where
How
When
Embassies
Hospitals 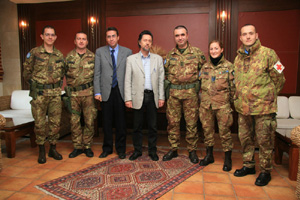 The Network operates in Italy through the dense web of relationships that each Association has set up during its activities and now has made available online.
The reports come from countries around the world, where for political reasons, war or social local health care is not able to cope with certain diseases are perfectly curable in Italy.
The exchange of information with other existing networks also allows to target patients in locations where there is the presence of hospital facilities, even temporary, able to satisfy the need without forcing the patient to long, in some cases exhausting for its conditions, air travel, which sometimes also of considerable drawbacks.
The availability of facilities of our Armed Forces present as peacekeepers, Embassies and NGOs in the area of operations is one of the strengths of Guariamoli.
In Kosovo, in April 2011, the Embassy and the Italian Army representative for CIMIC, Lt. Col. Michele Di Marco, identified in Guariamoli, after a year of joint activities, the organization which could succeed the CIMIC Health in the management of the reports so far they operated.
This required a quick reaction of the Network that resulted, the following month, to the establishment of a field office in Kosovo, called Hub-Ks, of Guariamoli (see the project), in collaboration with AVSI Kosovo.

© 2011 Guariamoli - All rights reserved - info@guariamoli.org - Privacy
Website created at no cost by the volunteers of the Coordination
Translation by Sara Utel